Organic & Natural Products Expo partner, HOT 102.7FM has made its mark on the local industry with 13 nominations in the 2022 SA Radio Awards, a little over a year after going live as Johannesburg’s newest commercial radio station.

Those nominations include for its two flagship shows – Joburg’s Hottest Breakfast Show and The Big Joburg Drive – and in the coveted ‘Commercial Station of the Year’ category, whilst significantly, HOT 102.7FM made the shortlist in the ‘My Station – Most Votes’ and ‘My Station – Most Loyal Listener’ categories.

There were also two nominations for The Mark Pilgrim show in the ‘Daytime Show’ and Weekend Radio Show’ categories, whilst three of HOT 102.7FM’s entries in the ‘Internet Radio Show’ category – Club Classics with Shane ‘The Duke’ Wellington, Late Night Love Songs with Treasure, and Evenings with Benjy Mudie – made the shortlist.

HOT 102.7FM was also rewarded in ‘Radio Innovation’ category, whilst its remaining nominations were for Early Mornings with Mzi in the Night-Time Show category and HOT 1027 Business with Michael Avery in the ‘Podcast’ category.

Providing the icing on the cake, veteran radio personality Benjy Mudie has been added to the list of ‘Hall of Fame’ inductees, whilst at the other end of the spectrum, HOT 102.7FM has a ‘Bright Star’ inductee, in the form of news bulletin reader Tshegofatso Seleke.

“For Johannesburg’s newest commercial radio station, that’s pretty impressive,” said Lloyd Madurai, Managing Director of HOT 102.7FM. “But I’m not all that surprised, as I believe our combination of playing the best ‘Old Skool’ and R&B music, together with some of the most experienced and popular presenters in the industry, is pretty compelling. It’s just nice to now get that recognition from the industry.”

HOT 102.7FM first went live on 1 July 2021, with a focus on playing only the hits from the 1970s, 80s, 90s and 2000s, and a presenter line-up featuring some of the biggest names in the industry, including the likes of the vastly-experienced Tony Murrell, Kevin Savage, Mark Pilgrim, Ursula Chikane, Simon Parkinson, and Treasure Tshabalala.

“But, our presenters are just one element of the overall HOT 102.7FM offering,” said Madurai. “We also like to throw the best parties, have an incredibly effective CSI division in Hot Cares that does some amazing work in the community, making a meaningful difference to a host of lives, and we generally like to have the maximum fun possible, with putting smiles on people’s faces our priority.”

HOT 102.7FM congratulates all its fellow nominees and looks forward to celebrating South African radio excellence with its industry colleagues when the winners are announced at the SA Radio Awards event on the 26th of November. 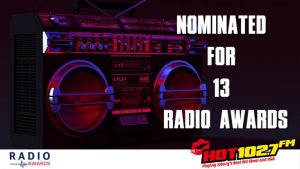 Get listed on the directory to gain exposure to thousands of trade buyers and consumers seeking products in your category.

Trade visitors: There is no charge for bona fide trade visitors to attend, but the application must be filled out in full and is subject to acceptance by the organisers.

Exhibitor registration: In order to preserve the integrity of the event in terms of product suitability, please complete the application and we will revert to you.

Register your product on the Organic & Natural Products Portal Africa.